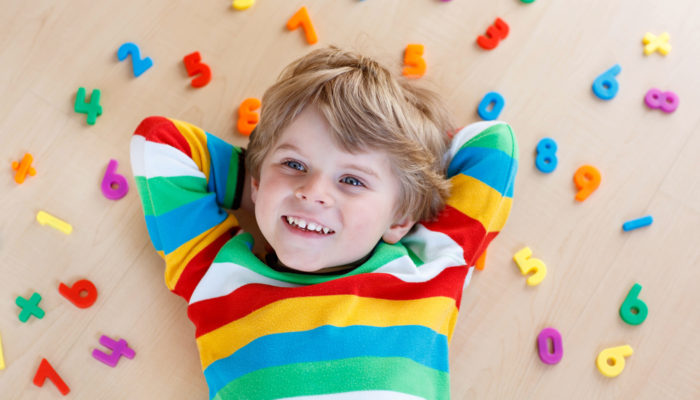 Your child has learned to count to ten, and is able to count up to five objects with one-to-one correspondence. If that is the case, a good foundation has been laid. But how about associating each of the numbers with its visual image? Number awareness involves three distinct elements. The child must be able to name numbers in sequence, count objects, and recognize the written numbers and the quantities they represent.

To us as adults, the visual image of each number symbol is so intimately connected to its concept that we tend to think of them as one. To the child the associations are is not so obvious. And for the child with word retrieval difficulties learning them can be a major challenge. (See my article Impacts of Word Retrieval Difficulties.)

Even learning to name all the numbers to 100, or just to 30 or 50, can be challenging. The numbers between 10 and 20 are particularly difficult. The words eleven and twelve do not seem to relate to any of the other number words. And how can you tell the difference between fourteen and forty or sixteen and sixty?

A number chart can be very helpful in teaching your child to associate the name, concept, and visual image of each number. (See my article on Structured vs. Random Practice.) It will also be very helpful when teaching your child to count by tens, fives etc. This is another important skill, a lead-in to multiplication. I have used the chart with my students all the way up into third grade.

Some Number Awareness Needed Before Using the Chart 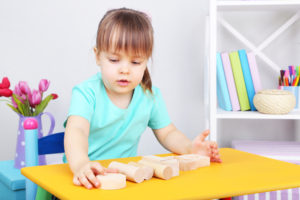 See my Tools post Help Your Young Child Develop Number Sense. You will also learn more about what is involved in number awareness in my article, Are Math and Number Sense Language Skills?

There is not much need to start introducing the visual symbols in a structured way before Kindergarten. At that time, however, it becomes important to learn to connect the written numbers to their names and quantities.

I favor using number charts on which each line ends with a nine rather than an even ten.  This way, each new ten starts a line so that all the twenties, thirties etc. are together on a single line.  This makes the names make more sense for the child. It also makes it easier to later teach the concepts of ones and tens and eventually hundreds.

I made the 0-59 chart in order to have fewer numbers and larger print for the young children. In my experience, the Kindergarten curriculum generally includes recognizing numbers to 30. This may vary from state to state and might change from year to year.

On both of my charts, the 0 is included but appears faded. This helps in teaching the child that 0 represents “nothing.” We do not start our counting with 0 when we count objects. 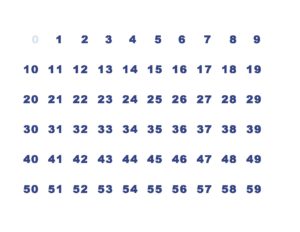 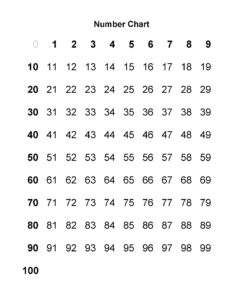 It is helpful to print the 0-59 chart on cardstock to facilitate the look-it-up procedure described below. It also makes it easy to cut the chart into strips with fewer numbers on each. This might be needed if your child is easily overwhelmed in the beginning.

Use Number Chart to Associate Symbol with Number Word

To begin teaching the symbols, have your child point to each number in order while counting as when counting objects. If your child does not yet say all the numbers to 10 in sequence consistently, use the “shadowing” technique. You will find it described in the Tools post Alphabet Chart for Learning Letter Names. 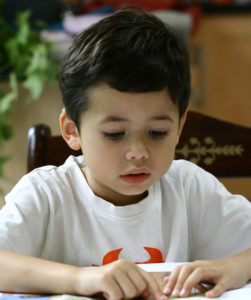 I suggest you start with just the numbers 1-9. Continue practicing these until your child consistently names all the numbers in order while pointing to each. Firm up the association of each visual symbol to its name and quantity by applying steps 2 and 3, before moving on to higher numbers.

Once your child consistently names all the numbers in sequence, it will be time for the look-it-up procedure. This step will help your child firm up the number sequence. For this activity you could use any number tiles. However, I suggest you write the numbers on individual cards. The reason will become clear when introducing double-digit numbers. 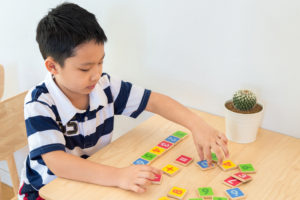 The numbers on your cards will be larger and look a bit different from the numbers on the chart. This is good, as your child needs to learn to recognize them in any acceptable form. Writing them by hand will have an additional advantage. It allows you to write the 9 with a straight line, making it look more different from the 6.

You will need nine 3×5 index cards. Cut a strip 1/3 of the width off each card. These nine strips will be approximately 1 5/8 x 3 inches. Use them to make the nine single digit number cards. On the wider parts of the cards write the even tens 10-90. Write them in such a way that the zero will be covered when one of the single digit cards is placed over it. Set these aside to use later. 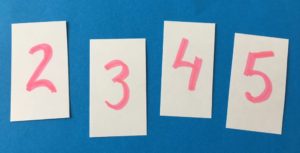 Now turn the chart up side down so the numbers can’t be seen. Have your child put all the single digit cards in order.  Then have your child check his or her performance by turning the chart over and matching the number sequence. Let your child discover any error and fix it without your help. Such self-checking will boost your child’s confidence while teaching a valuable self-help strategy.

Now it is time to make sure your child can match up the symbols and their names with the concepts. This will combine all three basic elements of early number awareness. Find any little objects of which you can assemble a number up to 9.  You can simply use blocks, Lego pieces or some other kind of tokens. But, it might be more fun to count toys such as small cars, animals etc. 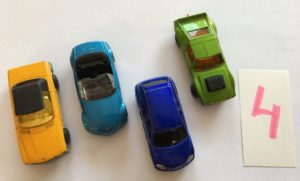 Make sure your child counts the objects with one-to-one correspondence. This is one of the important early number awareness skills. It is helpful to have your child move the objects and line them up in a row while counting.

Once your child can consistently count 1-9 objects and match the number cards, try another activity. Have your child count a set of no more than six objects. Then quickly give your child a few more. Guide him or her to continue counting while adding the additional items. Doing so without going back to start over is called “counting on,” another of the skills included in number awareness.

By using different size sets of different objects, you can introduce comparison concepts. Are there more of the cars or the trucks? Which number is higher/lower? These concepts are also an important part of number awareness.

Now it is time to introduce the second row on the chart.  As mentioned, the teens are always the hardest number words to learn.  Unlike the rest of the numbers after the teens, there seems to be no logical reason for the names in this series. Where do the words “eleven” and “twelve,” come from? And what about “thirteen” and “fifteen?” The young child does not easily perceive the similarities between “thir“ and three or “fif” and five.

Neither do children recognize that “teen” is simply a version of ten. And why does this version of ten appear at the end of the word? After all, the rest of the double-digit numbers all start with the ten-number, twenty-three, forty-five etc.

Again, use shadowing to help your child practice saying these numbers in sequence. As you say the numbers, exaggerate “teen” in order to later contrast with the -ty ending.  Explain that teen means ten so that for example “fourteen” is four and ten together. Have your child practice the entire number sequence by point-and-say until proficient.

Use sets to demonstrate how the two numbers are combined to make the new number. You just need to use something of which you have enough to first make a set of ten and then add another set of 1 through 9. 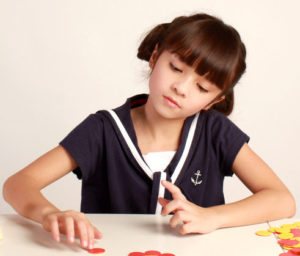 Now have your child move the smaller set next to the set of ten. Then have your child cover the 0 on the 10-card with the other number card. Repeat the activity until your child fully understands the principle of how these numbers are made up. 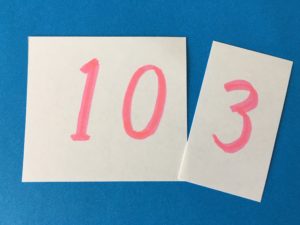 Next move on to the 20s. Model the numbers first, if needed. Otherwise, just say, “Count with me,” and go directly to using shadowing. Let your child discover how these numbers are made up of twenty followed by the familiar single-digit numbers, the “ones.”

Your child can follow the pattern learned for the 20s for each of the other series. Confidence will tend to soar at this point, as the many numbers that initially seemed overwhelming are now making sense.

Naming individual numbers out of sequence can still be challenging for the child with word retrieval difficulties. To practice further, have your child name numbers as you point to them randomly on the chart.

If needed to motivate your child, make a game of the practice. For example, have your child earn tokens toward some little price. Set your own rules according to needs. Your child could perhaps earn two tokens for an immediate, correct response and one for figuring it out without help. This would reward independence and accuracy even when the correct answer does not come quickly.

At the kindergarten level, the 0-59 chart would be sufficient. If you feel your child is ready, you can use the 0-100 chart. It would then be appropriate to also practice naming all the even tens in order, simply going down the first column. I hope to share ideas for counting by tens as well as other numbers in a future post.