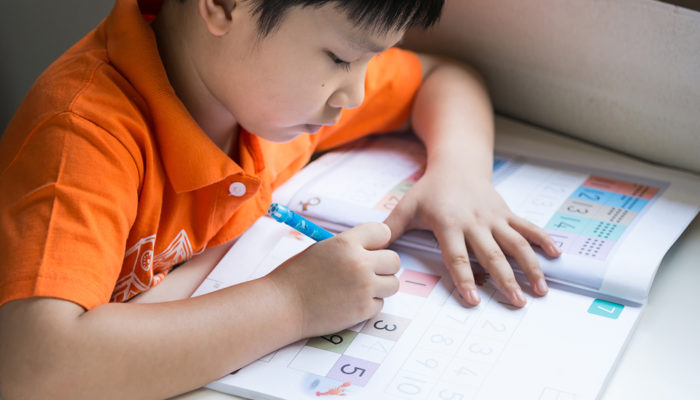 So, if their challenges are in language, why are they having difficulty with math? After all, we generally think of math and language as requiring separate skills.

The fact is that learning number sense and early math skills involves a lot of language. To learn numbers, the child needs to learn three separate skills: naming the numbers in sequence, recognizing the quantities represented by the numbers, and finally associating the numbers with their symbols.

Naming numbers in sequence is a language skill similar to that of naming the letters in alphabetical sequence. It involves recall of the words along with sequencing ability.

Some children might learn to name the numbers through counting by rote quite early. Parents are naturally impressed with their young child’s achievement. But counting by rote, though an important skill, is in and of itself of limited value. It does not automatically lead to understanding the number concepts.

To learn to associate numbers with the corresponding values, the child needs to be able to count objects and compare quantities. There are many toys designed for toddlers to explore these concepts. But to really learn them requires a certain level of cognitive development. Skills in this area are therefore only gradually learned during the preschool years. 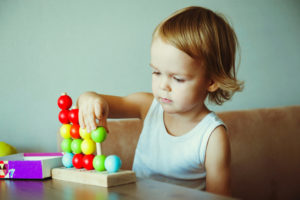 Some children, who do not otherwise show signs of language processing difficulties, might continue to struggle with these skills. Nevertheless, there is a great deal of language involved. First, the child must know and recall the number words. Then the child must understand comparative concepts such as more/less, bigger/smaller etc.

I recommend laying the foundation for these important skills early by first contrasting just one and two. See my Tools post Teaching Early Number Concepts. 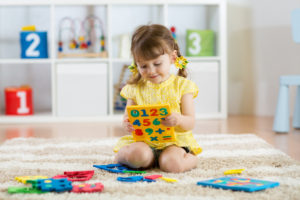 Young preschoolers are generally not ready to recognize and remember abstract symbols. Many children have difficulty with this all the way into first grade. See my Tools post Number Charts—Basic Use.

A few years ago, I needed a list of curriculum related vocabulary to construct language goals for the primary grades. I ended up getting most of the words from the math curriculum, which is loaded with language concepts.

Shapes and Their Attributes

The number of math related words your child needs to learn from Kindergarten through third grade is staggering. Just the basic shapes are difficult for young children to sort out and remember. What about words like triangle and rectangle? They sound so much alike. And there are octagon, hexagon, and pentagon. It is all so confusing to a child who struggles with naming related words. It is not surprising that several of my students come up with a word like “rectagon.” 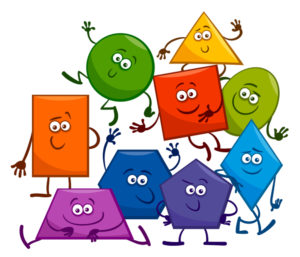 Then they have to learn to describe these shapes in terms of sides and angles. No, we don’t call it “corner” on a shape! But then, when they learn about cubes, they are supposed to use the word corner, along with new terms like face and edge. And there are other solid shapes to name, like sphere, cone, cylinder, and pyramid.

Basic geometry is not the only area of math loading the child’s mind with a barrage of no terms. There are addition, subtraction, multiplication, and division with the related terms sum, product, difference, and quotient. How can the child, who struggles a bit with language, be expected to remember which belongs with what? But wait, there is more. How about fraction, decimal, numerator, and denominator?

The math curriculum includes time concepts, hours on the clock and names of the days and months. And how many days are in the week, how many months in a year? Money is another topic in the math curriculum with more words to learn. Which one is a nickel and which one is the dime? And why is the bigger one worth less anyway? 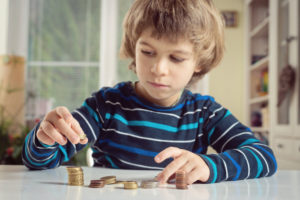 Then there are units of length, weight, and volume. There are values and amounts. What is the difference between those anyway? Then, you have to learn to predict and estimate, and decide what is possible, likely, probable or certain.

Is it any wonder a child with language processing issues and word retrieval difficulties feels overwhelmed by math?

The Fact About Memorizing Math Facts

When my students were in third grade, I had already worked with them from Kindergarten or first grade. We had worked on naming numbers, and on counting by tens, by fives and by twos. I had taught them strategies to remember the names of shapes and other math related concepts. We had also worked on the math facts involved in “making tens,” i.e. understanding basic complementary numbers.

Now, by third grade, they were faced with a new challenge, learning multiplication facts. For at least three of the four students in my group, this was the hurdle that made them think math was the hardest thing in school. 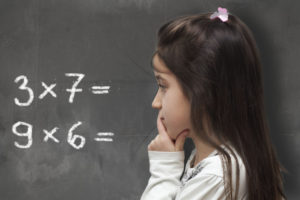 Quickly calling up words and isolated facts from memory is exactly what is hard for someone with word retrieval difficulties. Not counting the 10s, there are 100 multiplication facts to memorize just from the 2s through the 12s. I never mastered this feat before I was an adult!

There is no doubt that higher level math requires a special skill set. It is also true that becoming a great communicator and a linguist requires a different set of skills and talents. Nevertheless, there is a lot of language involved in early math skills. To find math challenging at this stage is not unique to the four students in my current language group. (See further my article Impacts of Word Retrieval Difficulties.)

Here is a very readable article on number sense:

What Are Word Retrieval Difficulties?
November 8, 2017