Imitation of sounds and words is an essential step in learning to talk. If your child is late in talking or has speech that is unintelligible, you will find this activity helpful. Most two and three year olds love form puzzles. These are the wooden puzzles in which each removable piece represents a complete, easily recognizable object. Even some children as young as 18 months like them, as do some four year olds.

I use these form puzzles to stimulate imitation of words, and I like to start with farm animals. It’s a theme of high interest to most young children, and most of the words are short. A theme of toys with objects such as ball, doll, car, truck, bear etc. also works well. A wild animal theme is not as good to begin with, as it includes more two and three syllable words. Imitation of such words requires a higher level of skill.

One of the wonderful things about form puzzles is that they are inherently motivating for young children. Once the child knows the rules of the “game,” receiving the piece becomes a natural, built-in reward. There is no need for extraneous reinforcers such as fruit loops or M&Ms to keep the child’s attention.

Sit across from your child or around the corner of a table, so that the child can clearly see your face. Remove all pieces and place them face up within child’s view, but out of immediate reach. Give the board to the child.

Do not let your child play freely with the puzzles you want to use for these activities. They should be kept away from the child as “Mom’s toys” and only come out “to play the game.” Otherwise the activity looses its naturally motivating factor.

Your child gets to pick which piece to “ask for.” The child, who is not able to make an intelligible verbal request, can point to the space on the board or to the piece. Make it very clear that it is “against the rules” to grab the piece. Hold the selected piece close to your mouth as you articulate the word clearly. Say the word slightly slower than what feels natural, and make sure your mouth movements are distinct. 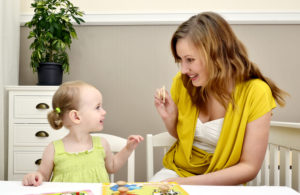 As you repeat the activity, try to expect just a little bit more each time. Repeat the word once or twice to give your child the opportunity to improve the imitation effort. When you perceive even a slight improvement, immediately give the piece to the child. If there is no improvement after a two or three attempts, give the piece anyway.

Do not repeat the activity with the same puzzle in the same session, unless your child insists on it. Even then, never use the puzzle more than twice before putting it away. If you get no initial improvement after several sessions, set aside the puzzle for a few weeks before trying again. (If your child is around two years of age and stuck at the nonverbal stage, you need to consult a speech-language pathologist.)

Be aware that with this activity we are not looking for perfection! The child, whose speech is not severely lacking, probably does not need it. We are looking for small, incremental steps toward a goal. Professionally, we call this “successive approximations.”

It is important to immediately reward any attempt to improve the imitation. But it can be very difficult for parents to judge when a slight change in the child’s response represents an improvement. The following examples will hopefully be helpful as guidance.

Say that your child is only attempting to imitate mouth posture without any sound. Adding some resemblance to a vowel sound would then be an improvement. You could anticipate this and extend the vowel as you model the word. Any resemblance to the “ow,” even “ah” for cow would be a significant improvement over mere silence.

For the child who only says vowel sounds, the addition of any consonant represents an exciting improvement. Most commonly the first consonants are /m/ before or after the vowel, /b/ or /d/ before, or an /s/-like sound after the vowel. An attempt at saying bird might come out as “buh” or even “muh,” cow as “dah,” pig as “bih,” lamb as “am,” or horse as “osh.” Any of these would represent a big step forward.

If your child uses consonants but leaves them out at the end of words, you want to over-emphasize the ending consonants when you model the words. Any effort the child makes to add a sound at the end of a word represents a step forward. Successful attempts might move bird from “buh” to “buhd.” You might get “dod” for dog, “bid” for pig, or “en” for hen. Any such effort is great progress!

Any time you see your child trying, immediately reward the effort even if you do not get the desired result. The effort to add a consonant at the end of a word might only result in an added vowel. The child tries to imitate your “pig” and comes out with “pi-uh.” Good, your child tried! Reward your child and expect that further improvement will come with time.

Don’t expect that progress you see in one session will automatically be repeated the very next time. If the child was successful once, it will happen again just not necessarily every time. Keep modeling the words, pushing for improvement but accepting the effort after no more than three tries.

Note: When it comes to judging whether to accept the child’s imitation, the experience of a qualified SLP does make a difference.  Through our knowledge of phonetics we can tell when a child’s response approaches the desired response. We also know just how far to push and when to back off.  Furthermore, it is important for parents to realize that children can’t take the amount of pressure from a parent that they could from a professional. The emotional attachment to the parent makes the child more sensitive to any perceived pressure to perform. Parents should therefore always err on the side of expecting too little as opposed to too much.